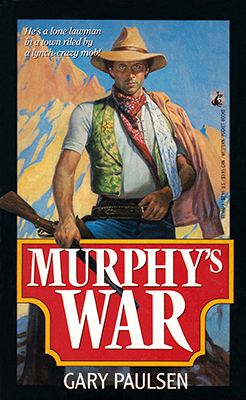 
Sheriff Al Murphy is fed up with Fletcher, Wyoming, a two-bit hole in the wall that has no use for a real lawman. Now they’ve gone and lynched a powerful Texan’s only son and broken Murphy’s arm in the process. The streets are about to run with the blood of vengeance – and Murphy’s only half alive from hard drinking and hard fighting, and a loss so raw only whiskey numbs the memory of that lone canyon grave.

Soon Murphy’s taking them all on: the power-hungry feedstore owner and his rowdy hired hands, and the hardnosed Texas rancher and his small army of cowboys. His only weapons are a sawed-off shotgun, a Colt revolver, his trusty double-action Smith – and the knife-edged courage to go down in a blaze of white heat and lead.

Although the back of this book states it’s the third in the series, it is actually the fourth and it follows on from the correct third book, Murphy's Herd (that Pocket have wrongly named the fourth) quite closely. Still struggling to come to terms with the death of Midge, Murphy is still contemplating suicide but can’t bring himself to put a bullet through his brain. Turning to drink he hopes the alcohol will do the job for him.

The opening scenes of this story are very powerful. Murphy, with a broken arm, is powerless to stop the lynching. It’s a hard-hitting sequence of events told in tough, brutal prose. Sickened by what has happened Murphy decides to leave the town to its destruction by the soon to arrive Texan rancher.

Even though the author creates a great sense of impending doom the tale does slow down a bit at this point. Murphy spends time contemplating his life. Even though he stops drinking he still sees no purpose in living so heads back to Fletcher to go out in a blaze of glory, not to save the town, but to die.

Gary Paulsen then picks up the momentum again and writes a superb, tense, violent final showdown that makes for some terrific gripping reading as Murphy takes on the Texan and his men alone. This really is a savage gunfight that sees Murphy hit again and again. Among all the blood and gore it seems Murphy’s wish to die is to be fulfilled.

Murphy’s War more than matches the strength of the previous books, apart from the slight slag in the middle, yet this slowing of pace could just be what makes the beginning and ending such powerful reading. It will be a long time before I forget that final gunfight.

If you are a fan of raw, hard-hitting westerns and you’ve yet to read the Murphy series by Gary Paulsen then may I suggest you do so as soon as you can. To get the most from this series the books need to be read in the correct order.