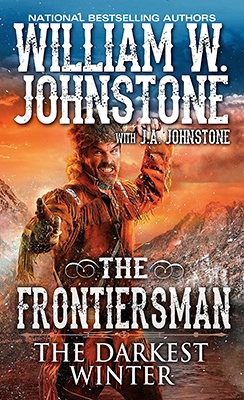 THE FRONTIERSMAN
number 3 of 4 to date
By William W. Johnstone with J.A. Johnstone
Pinnacle, August 2017


Exiled from the Smokey Mountains for gunning down a man in self-defence, Breck Wallace tries to make a new home in St. Louis, even tries his hand at romance, but some men are too wild to settle down. Breck is soon back on the trail, where a vicious gang of trappers, after his goods, picks up his scent and begins to dog his every step, until Breck’s only choice is to bed down for the winter with a tribe of friendly Indians. In the frigid, brutal cold of a Rocky Mountain winter, he hopes to find peace . . . but death is not done with Breck Wallace. When Breck’s partner, Morgan, is left for dead, the frontiersman must ride deeper into the mountains than he has ever gone before. Peace be damned. The blood with flow until vengeance is his alone . . .

Book two in this excellent series ended with Breck Wallace heading for a new life which included getting married. It soon becomes apparent that this happy day never happened and Breck is unwilling to discuss why, even with his best friend Morgan. The reason is eventually explained, told in a heart-rendering flashback sequence. The rest of this story introduces us to some terrific new characters that will cause Breck’s actions to be driven by an all-consuming blood-lust.

The book is packed with violent encounters for Breck, both with rival trappers and Indians. But it’s the trappers who are his main adversaries and this leads to a deadly trap being set that Breck willingly charges into with no regard to his well-being, just that he satisfies his need for revenge.

Strangely, the book’s blurb isn’t correct when it tells of Breck’s reason for vengeance. He had no idea that Morgan has been attacked and is presumed dead. This isn’t revealed to Breck until after the final brutal battle with the trappers. I’m not going to say why Break goes on the rampage as that will spoil one of the main storylines for readers or tell here of Morgan’s fate.

This author really does know how to spin a gripping yarn. The pace of the book is relentless and the majority of the chapters end on cliff-hangers, making it almost impossible to put this book down before finding out what happens next. And that is exactly how one of the story threads ends too, promising of things to come in the next book that guarantees I’ll be reading it very, very soon.