Lone Star and the Hangrope Heritage 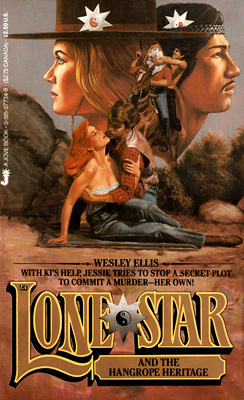 
Who was the mysterious gunman who burst into Jessie’s room shivering with fear? He had come to talk, to tell everything he knew about the cartel, the mortal enemy of the Starbuck empire. But as he opened his mouth to speak, a well-aimed bullet struck him dead.

Now all Jessie and Ki had to go by was a faded old photograph the gunman claimed was the “key.” It wasn’t much of a clue, but it might unlock the secret plot in time to save Jessie’s life!

This story features Ki more than Jessie, she almost takes a backseat in this fast-paced action-packed episode in the Lone Star series. The Lone Star duo have to do some investigative work to discover who the photograph is of and why it is so important. What it leads to is a devious plot where life is cheap and no-one is safe. Double-cross, hooded riders and sensual women combine in a page-turning read.

The Lone Star books are classed as adult westerns and they do contain explicit sex scenes but don’t let that put you off reading them as these encounters are easy to skip and you’ll be left with a gripping tale of intrigue, gunfights and martial arts – Ki is a martial arts expert and prefers to use his talents in this kind of fighting rather than using traditional western weapons.

I believe the person behind the pseudonym of Wesley Ellis this time around is Jeffery M. Wallmann, who wrote book one in the series along with many others. I usually find this writers’ work to be very entertaining and this book is right up there with his best. In fact, I enjoyed it so much that I’m sure I’ll be reading another Lone Star book very soon.

The Lone Star series may long be out of print but they are now available as ebooks.