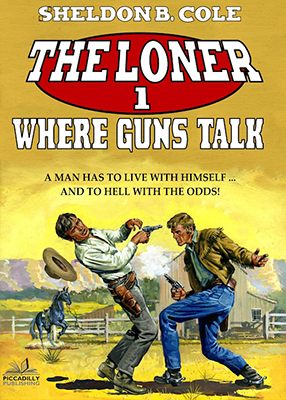 THE LONER #1
By Sheldon B. Cole
Piccadilly Publishing, October 2019
Originally published by Cleveland, 1967


Ahead was a cold-blooded killer and an innocent woman who wanted to believe he was no such thing. Behind was a God-fearing tyrant by the name of Isaac Madie and Madie’s three sons, all of them with vengeance in mind.

And Blake Durant was caught smack in the middle.

He wanted to rescue the woman and return a fortune in gold bullion to its rightful owners. But Madie had other ideas. And if it came to that, so did Ringo Nyall, the killer who’d set his mind on the gold … and the girl!

My western book collection contains a handful of Cleveland publications but I’d never got around to reading any of them. My first edition copy of Where Guns Talk was put out under their Bobcat Western line and numbered 405. Although I have read work by some of the authors who wrote for Cleveland, I haven’t read any of Sheldon B. Cole’s stories and as Piccadilly has begun to publish The Loner series in ebook form (along with other Cleveland series) I decided to hunt out my dog-eared copy and give it a go.

Cleveland westerns aren’t very long, this one having 92 pages of fast-paced prose. Each of the ten chapters are titled.

Blake Durant’s past is hinted at in this opening tale and this adds a hint of mystery to the reasons he gets involved in other people’s troubles, and by rescuing a young woman from three attackers he soon finds himself facing a number of deadly situations where some folk keep their real identity hidden and conceal some or all of the truth about their motivations.

The author presents the reader with some wonderful characters, particularly Isaac Madie, a man who is hard to like but you will feel his pain when things go wrong in the worst way possible. The girl, Angela Grant, is a memorable character too. Watching her slowly realize the man she is fixing to marry may not be all he says he is provides some fascinating reading, and she will also add an unforeseen twist to the end of the story.

Sheldon B. Cole’s descriptions are excellent, and they produced some very visual imagery within my minds eye, especially when reading the hard-hitting action scenes. Everything comes to a neat end and the final act left me with a grin on my face and the desire to read another Loner story soon.

Sheldon B. Cole is a pseudonym for Australian author Desmond Robert Dunn (1929 – 2003) who wrote over 400 westerns for Cleveland under a variety of pen-names, these being Adam Brady, Sheldon B. Cole, Matt Cregan, Morgan Culp, Shad Denver, Gunn Halliday, Brett Iverson and Walt Renwick.