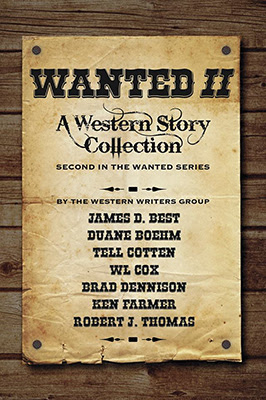 
A year after the first Wanted short story collection was published the second book in the series from The Western Writers Group has been released. Six of the authors from the first book appear in this one, with the addition of Ken Farmer who replaces Lou Bradshaw.

Like the first book, this collection of authors present the reader with new short stories that feature their own series characters, so you can read about Steve Dancy, Gideon Johann, Lee Mattingly, the McCabes, Jess Williams, Fiona Miller, and Storm Warrior.

Like any anthology this kind of collection is an ideal way to try authors who are new to you, or read new material from some of your favourites. Some of these tales fit in chronologically with the characters own series, some would fit in anywhere, and one of them continues a storyline begun in the first Wanted book. I would like to point out that you don’t need to have read any of the previous tales to enjoy any of the stories found here, but you may well find yourself rushing out to read more about some, or all, of them.

Here you will find stories that range from the traditional approach to western storytelling to one that borders on the mystical. There is plenty of action, some shocks, animal stars, and humour to be found in these fast moving tales, so there should be something to satisfy every western reader.  Me? I’m already looking forward to the third collection.

Lady Marshal by Ken Farmer
Deputy US Marshal Fiona Miller isn’t aware that two other groups are after two teenage boys and the $5,000 in loot from a bank robbery. One is a band of outlaws and the other is a posse of vigilantes led by the father of a young girl shot during the holdup. Who gets to the boys first?

What’s Right by Duane Boehm
Gideon Johann and Farting Jack Dolan find that they get more than they bargained for when they cross paths with a runaway girl while chasing a murderer.

Damsel in Distress by Robert J. Thomas
Jess has finally hunted down and killed the notorious Russell Bell and is on his way to the closest town to turn the corpse in for bounty. Along the way, his sometimes partner, Shadow, a huge timber wolf, finds him and leads him to a wagon where a beautiful woman was beaten up during a robbery and her husband shot dead. Jess helps the woman get to the town of Elk Ridge and then hunts down the three men responsible for the robbery and murder. When he does, things aren’t what they seem to be.

Thundering Hooves by Brad Dennison
A prequel to the novel Thunder. A story of the McCabes and their early years in the valley.

The Mirror II by Tell Cotten
Lee Mattingly and Brian Clark find a man bushwhacked and left for dead. Blamed for the crime, they are thrown into prison. However, they won’t go down without a fight. Along the way, they run into corrupt horse traders, a deputy with a grudge, and a woman with bitter memories.

The Legend by WL Cox
Charles Crawford, a man raised in China by Buddhist Monks after his parents were murdered travels to America and is captured by Sioux Indians as he travels west. This is an episode of Charles’ life while living with the Sioux.