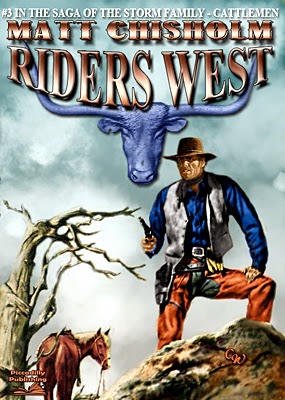 
Having quit Civil War devastated Texas, the Storm family – father, mother, three sons, two daughters – found their promised land in Colorado. But Colorado was then the American West’s furthest frontier, rich in fertile land but dangerously short on law and order. There were wild animals and Indians – but wildest of all were the desperadoes on the lookout for easy pickings …

Colorado’s Three Creeks country was a hard land indeed, where the strong took whatever they wanted to satisfy their greed and the weak were gunned down if they got in the way. Ed Brack ruled supreme in this brutal territory, thinking he could scare the Storm family off. But the Storms didn’t scare easy. They stood their ground. So the cattle king burned their house… and took their women.
Mild Will Storm, his brother Mart and black Joe Widbee saddled and rode against Brack, guns in their hands and a murderous hatred in their hearts …

Matt Chisholm almost gives this book a light-hearted tone to begin with. There’s the believable feeling of joy and anticipation of finding a new place to settle down and that of family love, of sticking together no matter what. But I did say almost, for Chisholm also includes hints to the harshness of the land and then there’s the hanging man and the questions this discovery brings such as who was he and why was he killed this way?

There are other questions too, such as can the Storms settle on their chosen spot successfully? Does someone else claim the land? It’s the latter that leads to dispute with Ed Brack and this soon turns violent and the Storms decide to take the battle to the rancher. This is where the story takes on a darker tone and becomes a long struggle to stay alive.

Matt Chisholm (real name Peter Watts) really excels when it comes to writing action scenes, he creates tension well and you can never be sure just who will come out of any exchange of gunfire in one piece, be they good or bad. It’s this uncertainty of whether Chisholm’s characters will survive that give his stories a hard edge of reality and make his books such gripping reads.

For anyone reading this series Riders West is a must read as it sets up some situations that will play important parts in coming books and I’m sure it won’t be too long before I read the next one, One Notch to Death.