Longarm and the Valley of Skulls 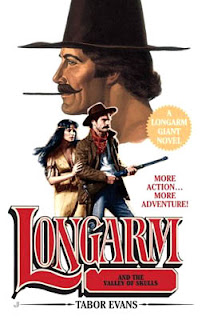 as by Tabor Evans
Jove, October 2008
A Longarm Giant Novel
Up in the Owl Creek Mountains, Wyoming Territory, lies a wretched place the Indians call Valley of Skulls. Settlers there have a whole heap of bad luck – including a posse of hooded killers – which is why Deputy U.S. Marshal Custis Long is stepping in…
Travelling to the valley, Longarm keeps company with the local Indian agent’s sister. Soon they reach the valley and it’s all business – bloody business. Because now Longarm’s to-do list includes taking a slimy rancher down a peg and finding this elusive posse – before they find him…
James Reasoner – writing as Tabor Evans – continues his, very welcome, idea of including characters from long-gone western series in his giant Longarm novels.
Here we have the return of Easy Company, nearly all the soldiers from that series have a role to play in this book, and from one of James’ own series we find out what became of Fury.
It’s mainly Longarm and Easy Company that take centre stage here, and James writes a chapter or two about one and then switches to the other, as both follow different trails that will bring them together at the Valley of Skulls. It’s here they will team up with John Fury too.
The book has everything you’d expect from James Reasoner, a fast moving story, loads of action, and a few twists and surprises along the way. James also includes a number of characters that’ll keep you guessing as to whether they are who they say they are and to their part in the plot.
If you’re a fan of Longarm, Easy Company or Fury then this is a must read but to be honest I’d say all western fans should find this a highly entertaining read.
Me? I’m already looking forward to James’ next Giant Longarm novel.
Posted by Steve M at 14:31